Will You Be a Vacationer or Be a Producer? - Samurai Innovation 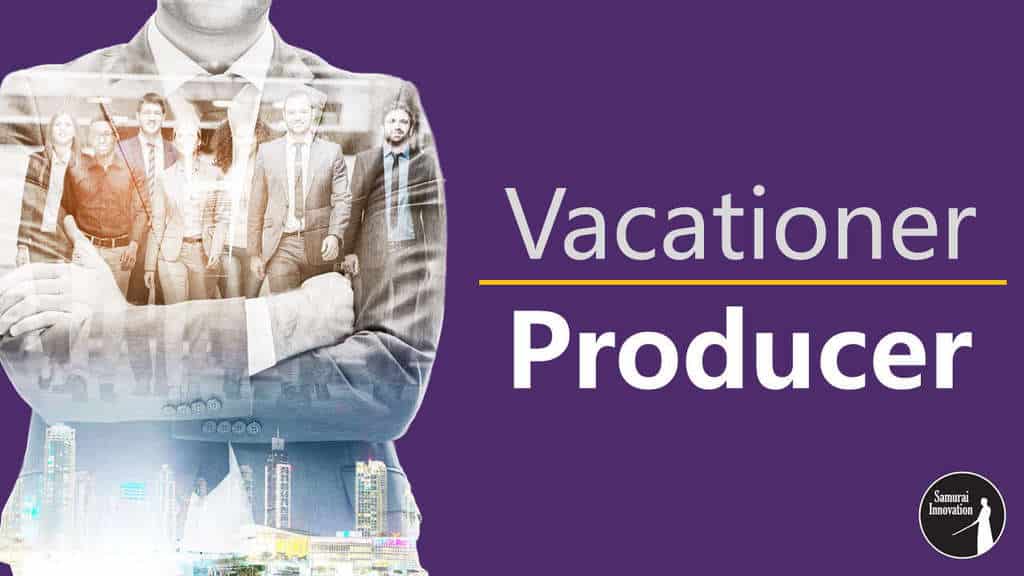 Our world right now needs you to be a producer.

I have been having tons of conversations with clients, other people, and dojo members. I think it's very interesting but one thing, if you put it on the record that will happen out of this situation we are living in is that two people or two groups of people are distinctly going to emerge and they're already setting up camp.

The first group is what I call the vacationers or the ostrich. The vacationer crowd are the folks that naturally may be inclined to say this is a really bizarre situation. This is horrible. It's scary. And, and they're true, they're right. But the vacationers  ere going to say, "Hey, this is also a great opportunity to just take a vacation from life and I'm just going to hunker down. I might put my head in the sand, I might be living in denial." Maybe I might just sit in my little apartment and just watch Netflix and do whatever I need to do a self medicate, binge watch TV, all that kind of stuff. I think there's a time and a place for all that, but those are the vacationers.

There is no denigration in this.

A second group is going to emerge.

The producer's going to take a bump or a bruise, but they're going to come out of the fight intact and ready for the next fight.

The producer is the person that's going to walk head and shoulders above the other ones.

The producers are going to lead and our world needs the producers and leaders today more than ever and you're part of that.

You are part of this crowd because...

The producers are going to come out of this saying, "One of the benefits of that thing is that I lost 15 pounds because I had time to exercise. I didn't have time to go out and eat all the fast food that I normally was accustomed to because I was stuck at home eating normal, good food that we prepared at home. I had made time to exercise."

The producers are going to come out of this refreshed and with a renewed body because everybody is getting more sleep now or will get more sleep.

Hopefully the producers will come out of this and say, "I improved a relationship or two because I was on the phone talking to people more than I've ever talked to people. I was checking in on friends and family. Maybe I was too busy to check in before."

There's a lot of things right now that might suck.

But the key is that the producer will come out of that and say, "That was not as pleasant as I ever would have wanted. That was not enjoyable, but guess what? I'm coming out of this situation with a few gifts. Those were the opportunities that I took advantage of. Those were the gaps that I made into an opportunity."

The producers will be the leaders that lead our civilization back to a peak state. Congratulations for being here with us.

That is my state of the current affairs or union address to you this morning. I hope you take it to heart because this fires me up knowing that we are a part of a group of people who are going to lead our corner of the world.

If I can inspire you to go out and lead strong and lead well, then I've done my job.

We all can be a producer during this time.

We all can read a new book.

We all can get more rest.

We all can make a beneficial, better improvement in terms of where we're going.

Do you agree with me?

If so, put yes in the comments below. If not, tell me why and let's talk about that.

Who Should Be Part of Your Weekly Planning

You Need These Elements To Be Productive