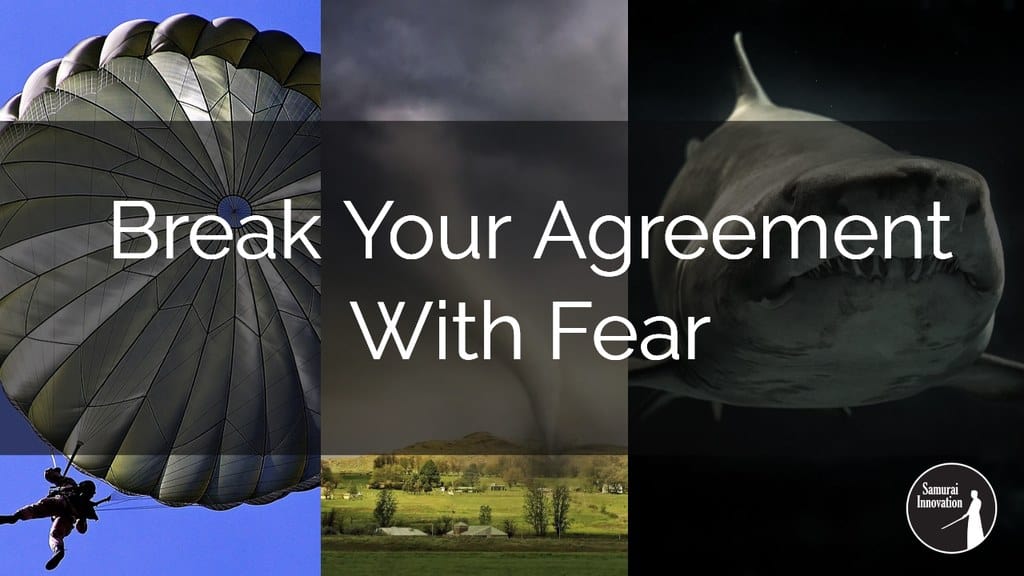 ​​Please watch the video below or read the rest of this article to find out how integrate this process into your work and life. The results can be a game changer for you and the people who count on you most.

Stay tuned because I'm going to go over that today, but now a little disclaimer and a ​warning about the video that you can watch ​below:

The video that you're about to see will contain images, footage of exciting, exhilarating, mind-bending, mind blowing experiences that you may have had or may want to have these experiences, these videos, these footage may cause you to fear get sweaty or have some sort of other physical distress.

Take caution in watching these videos because they may elicit feelings of fear, anxiety, or angst. But if you stay until the end, we will show you how you can start working on these things so that when you watch the video again, it will be a video of exhilaration.

​Break Your Agreement with Fear Navigation
​Difference Between Fear and Awareness
Do These Scenarios Make You Cringe?
Hang Gliding
Skydiving
Cliff Jumping
Roller Coaster
Swimming with Sharks
Storm Chasing
Whitewater Kayaking
​Public Speaking
Human Resource Meeting
We are going to help you break your agreement with fear
Start Your Agreement with Progress
Truth About Incremental Progress

​Difference Between Fear and Awareness

We sometimes forget that we've made an agreement with fear. I'm not talking about the once in awhile awareness building things. We all have awareness of things that are scary. I mean obviously if you're driving down the road and you see a bunch of orange construction pylons and signage and construction area and road work ahead; it would be irresponsible to not slow down. It would be irresponsible to ignore the warning signs around you and then cause harm to yourself or other people unnecessarily.

Do These Scenarios Make You Cringe?

Imagine this, it's eight o'clock at night and you're kicking back, relaxing, do whatever you want. You get a phone call from your friend and he said, “I have this trip booked to a resort called the resort of awesome. It's an all inclusive experience resort, meaning you can do all the experiences you want for free. It's all built into the price.

He had a buddy of jam out on him and he called me last minute and said, “would you like to join us?”

So imagine yourself getting up at seven o'clock in the morning and the next morning, once you've landed up the resort of awesome and you go and you get into a suit and you go hang gliding, hang gliding, or parasailing or parachuting, and you're just gliding in the wind, how does that make you feel right now?

How about another one So the next morning the Concierge says, guess what Your next experience leaves tomorrow morning at eight o'clock and we're going to shuttle you over to the little airport close by and where you'll meet your experience instructor. Now you're thinking, wow, what kind of experience is this.

When you get there, you see all these little planes on the runway and you're thinking, oh, what is this all about And then some guy comes up to you and says, “Hey, I'm John. Nice to meet you. I am your skydiving instructor and we're going to parallel tandem skydive today. I got your suit. I have all your measurements. It's all the Concierge gave to me from the hotel, we're ready to go. Let's get harnessed in buckle up and let's jump on board and let's do this.”

How do you feel now?

Well, if that wasn't enough, the next day the Concierge says, Hey, guess what you signed up for today We're going to meet just out behind and the little lagoon there, there's swimming and there's some cliffs and all that stuff.

How does that make you feel? Would you be jumping in with Ted?

So, if things can't get any better than that, the next day the Concierge says, “we're going to do something a little less scary today. Little less exhilarating. There's this awesome new theme park that's opened down the street. It is the thing that everybody wants to see. It's the attraction above all. And guess what? I got VIP passes for you and your friends to go. And today you're going to experience one of the world's greatest, latest roller coaster.”

I can tell you that I'm not much of a roller coaster fan, but I can do the roller coasters. I'm kind of a neutral tone when it comes to those.

But the next day the Concierge at the hotel says to you, “Today we're going to take it down a notch. We're going to go to the aquarium.”

Later on, you come back after swimming with sharks and you're exhilarated. Now you're sitting there, and you say to the Concierge, “What can we do tomorrow?”

The Concierge says, “Tomorrow looks like we're having a tornado coming through. We're closing down all the activities and we're getting everyone to stay in the resort. But I got something for you. Storm chasing.”

How awesome is that experience

You're back at the hotel, you're roasting some smores, you're having some drinks with some friends. You're talking about all these excursions you've been on. And guess what?

The Concierge comes in and says, “Guess what? We're not done. Get a good night's rest. Tomorrow's going to be a bumpy experience.”

The next morning, you get up and you're taken down to one of the most amazing rivers that you've seen. You're getting your kayak and your instructor’s giving you the kayaking course and then you guys set out on the river and you spend a day on the river.

Next thing you know, you get home from a week at the awesome resort.

Can you top those experiences?

How do you feel about those experiences?

​You're getting settled back at home with your friends and your family and you've been back at work for a bit and things seem to be awesome.

Then the phone rings and it's the president of your local university and the president says to you, “Your name has been put forward as a pillar member of the community. You're an outstanding member of our society. You've made some great contributions in the work that you do in your career and this year you have been selected as the citizen that we want to give the commencement address to our graduating class.”

Would you accept the offer the president of the university?

How fast would you accept, or would you run for the hills because public speaking is not for you?

Imagine another situation that happens shortly after your commencement speech.

You're called into a meeting with the executive team.

You walk in and there are a couple of executive members and some HR people sitting at the boardroom table. They welcome you in. How are you feeling when the president says, “Thanks for coming in. We need to talk about your future with the company.”

How's that make you feel right now? Are you feeling sweaty or nervous?

The president goes on to say, “We have been so impressed with the work that you've been doing. You've been making great progress in all the different projects you've been working on in your department and the initiatives that you've forged. We want to offer you a promotion that is two levels higher than your current job classification.”

Do you take the promotion?

Or - do you ask for some time to think about it and you negotiate yourself a better deal?

Which would it be for you?

Would you take the job and run, or would you fear that for some reason, you're just not at the right time in your life to take that promotion on?

Perhaps there's a reason that’s holding you back. What would that be?

This month we're going to look at these types of situations and more.

We are going to help you break your agreement with fear

​I   Someone Awesome, unconsciously decided on this day to enter into an agreement with fear.  This means that from now on, I will not enter into activities which cause me to try new things. I will no longer see the possibilities in new or different experiences that my life brings to me.

I agree to “play it safe” around doing things that will help me grow and obtain the goals that I set forth for myself. I will “play it safe” because this feels better to do the minimal amount than to expand my capabilities to do something great. I will look for ways to play it safe versus looking for ways to make progress on my goals, dreams or desires.

I agree to spend more time wishing, hoping or wondering about things that could happen in my life had I taken a little more action toward progress.

Start Your Agreement with Progress

If you would like to join me this month while we do this work in our Implementors group, I would be happy to have you. All you need to do, if you want to join us, is to complete this form and hit the send button. Tell me in the message that you want to “start an agreement with progress”.

I will return an email to you that will give you a way that you can join us and be an Implementor.

There's no long-term commitment. ​I'll send you the details with a special deal to get involved with us this month.

I coined the phrase and have said it before that “Incremental progress, done imperfectly over time, leads to monumental results.”

Let me break that down for you.

It's all about being incremental. It's a little by little by little, versus thinking that you must accomplish something monumental in a day or a month or a week. You don't have to climb the mountain in a whole day, but you got to put one foot in front of the other and start on the path of progress.

Incremental progress done imperfectly is the second key. Doing it imperfectly is more important than trying to do a million other things all perfectly which causes you to never get anything done.

Doing it imperfectly is the key.

Create a goal-getting plan to help you. When you do this, you will see monumental results start building up for you. Go out and break that former agreement with fear and create your agreement with progress. I look forward to working with you on this.